Companies are often described as decision factories. Based on the literature and extensive interviews, we created this Tellusant decision-making framework. 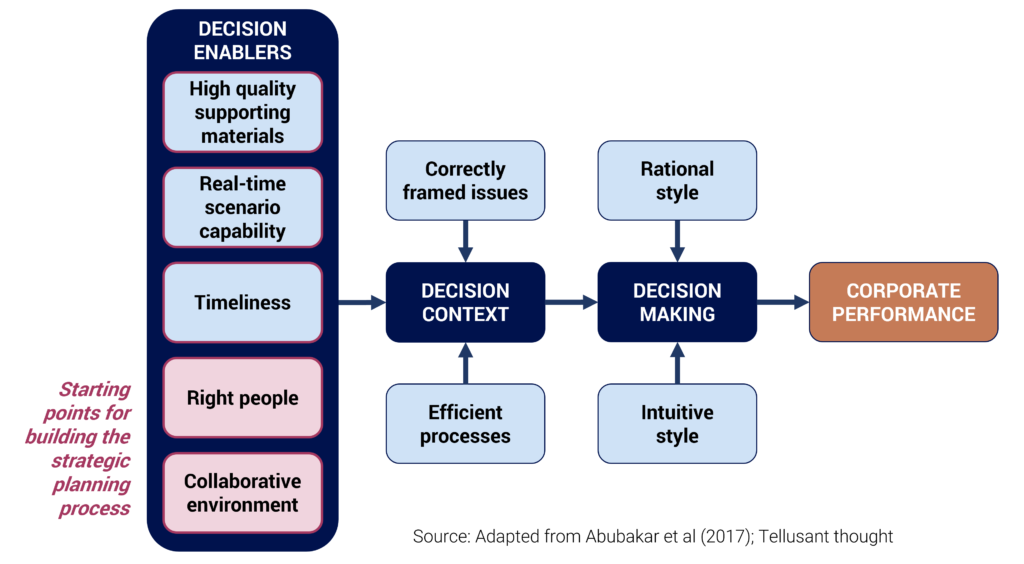 Decisions are not made in a vacuum. To us, there are five enablers that dictate the quality of decisions:

The enablers lead to to a decision context:

The actual decision making flows from the enablers and the context. There are two ways of making business decisions: rationale and intuitive.*

First, more effective processes will save money. There are 0.7 million corporate planning analysts in the United States, and 2.5 million worldwide. Most work on decision support efforts.

Second, Resource allocation is improved with better decisions. This is especially true of the decisions coming out of strategic planning cycles.

Third, capturing opportunities becomes more precise. This leads to top line growth which over time adds up to a major benefit for the company.

These factors is why, in a survey we conducted, executives are highly supportive of strategic planning, but find the associated processes sub-optimal.

* As individuals, we can also make instinctive (“reptilian”) decisions, but this is seldom called for in companies.

² Mintzberg, Henry (1994): The rise and fall of strategic planning

³ Argyris, Chris (2004): Reasons and rationalizations: The limits to organizational knowledge